1 on 1 With The Pros: Dave Poteat of Inside The Outdoors 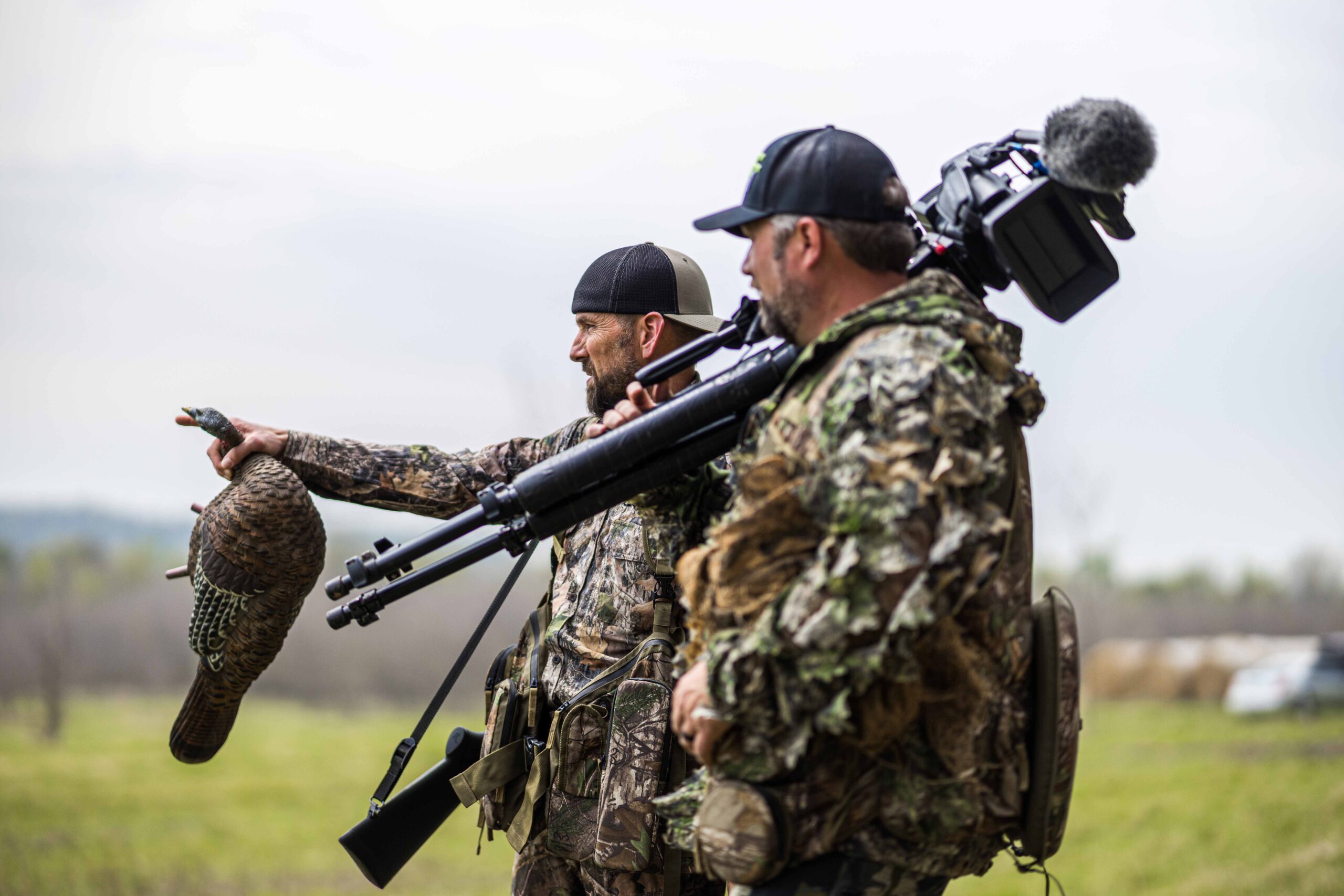 Dave Poteat had stars in his eyes. The sky was the limit, man, and he was going to get there. The sky is where dreams are, of course, and Poteat was just a Virginia dude giving up everything to move halfway across the country to chase his dream in the boonies of Oklahoma.

Consider that for a moment. Poteat grew up in Virginia in a pretty regular lifestyle of school, work, family, hunting and fishing. A lot of hunting, to be honest. He was outdoors as much as possible. His family got after it in the woods and fields for rabbits, squirrels, birds, deer and whatever else was in season. Their friends and extended family in the community did the same.

Poteat’s father, a state law enforcement trooper, had an engineering mindset and designed their home. Inside the home he designed a 20-yard indoor archery range. Poteat practiced and practiced and practiced. He shot regular shots and tried trick shots. He knew one day his outdoors passion would turn into something bigger. He watched old videos of hunters and hunting shows. He went to outdoors shows and gobbled up whatever print media he could get his hands on. The sky was the limit!

And then Poteat got a job as an internet technology security specialist working for one of the largest companies in the country.

Poof. His dreams were relegated to weekend hunting trips or quick half-day getaways. He could look out the window of his office building to the parking lot eight stories below and see his black, mud-spattered Chevy Z71 pickup amid the high-dollar and boring cars other men and women drove. He made a bunch of money, and was so good that a rival company hired him.

But in his heart was a 19-year-old hunting-obsessed kid with a big-box store consumer camera he used to shoot hunting videos of his family. He even took a hunting video course halfway across the country in, ironically, Oklahoma. He watched and listened and took notes. Angles! White balances! Noise levels! Lavalier mics and waiting for the spot, and getting the shot! He absolutely knew he was going to produce the hottest, sharpest, best video of all the students that week. The students were on a treestand about three feet off the ground on a telephone pole. The “deer” was a man slowly emerging from behind a Dumpster, turning and moving and making noises. It was crude but the gist was to get the angles and noise levels and everything on video. Poteat just knew he nailed it like a champ! Instead, Poteat forgot to turn on the record button. All he had recorded was white static.

He was dejected, of course. He went back to his IT job in that big building amid all the other people working for the big banking company. He continued to blunt spammers and keep the company computer systems safe. Poteat was very good at his job. His dream never disappeared, though. So, in 2001 he quit his high-paying cushy IT job and moved to Oklahoma. He was going to make it. Poteat knew it. And it only took a few years of struggling and going broke, sleeping in a garage, mowing yards to make money to eat dollar meals (sometimes) and eventually, as most dreams do, he caught a break.

One Break, Coming Up

Poteat has been the host of Inside Outdoors for 15 years, a popular show he conceived in which he talks frequently with his cameraman or others. It’s not the typical host-whisper-sponsor-deer-sponsor-whisper-kill-sponsor-ending show. His gregarious nature and desire to explain stuff couldn’t be contained. Plus, Poteat wanted something different.

That break he finally got was a big deal. He was renting a bedroom from a couple in Oklahoma, borrowing their mower to mow yards, working at an archery shop, eatng off the dollar menu at Wendy’s, avoiding the repo man and struggling to hang on. He then got a gig building a house deck at a big cattle ranch. A ranch hand needed a deck and hired him. That guy’s brother-in-law needed some greenhouse work.

“As cool as I thought I was, it was bottom of the barrel,” Poteat said recently while driving back from Kansas to his home in Oklahoma. “My dream humbled me … but the one constant was God. It taught me a lot about life and things being a steppingstone into life, and more than just chasing a dream. I started doing that woodworking, and God opened that door, but I still was living in a garage halfway across the country not doing what I went out there to do.”

Poteat and his landlord were talking one day and Poteat’s dream came up. His landlord said he knew a guy and would make a call. Sometimes it’s like that, isn’t it? A guy knows a guy, makes a call, and you get a meeting.

“I went to meet with Beau Anello, Tim Anello and Kathy Anello with Anello Productions,” Poteat said. “They’ve done all kinds of television production work and video work, things for big names including America’s Most Wanted, national commercials, Bassmaster, the old Bassmaster Classic championships and others. They called Jimmy Houston to get a reference, and he said I did good work.”

Poteat pitched the idea that would become Inside Outdoors, which is on Outdoor Channel and My Outdoor TV. He and Tim Anello went to southeast Oklahoma to do a spot-and-stalk for hogs. It also was a test run. Anello, of course, wanted to see what Poteat could do. Poteat knew yet another big shot at his dream was in the works. They hit it off, and the conversations about “Did you see it go there” and “What do you think?” turned into a give-and-take that was different, engaging and fun.

“November 1, 2005, was my first day with the Anello family and we’ve been doing Inside Outdoors since then, bringing the behind-the-scenes guys and discussion to the front,” Poteat said. “I’m not the only guy. I’m not “the” guy. We’re all a team, we all work together and we all are a part of it. The show debuted in January 2007. Since then we’ve been blessed to be nominated for multiple awards, we’ve had great sponsors — ironically, I went from avoiding the repo man to having new trucks — and all the other ups and downs of making a show in this industry. Things have changed, for sure, with how people consume information. The production efforts and striving to make the best show we can, though, those things don’t change. We’re always looking at how to make things better, to improve and to do our best.

“The easiest way to describe it, some would say, is it was a sacrifice to get to this point,” Poteat added. “I’d say that it was a way that helped me grow tremendously as a person during this process. Tenacity and great friends and a lot of prayer … those were the only ways I got through it. It was rough. It’s a great thing to be where we’re at, but we sure didn’t just walk in and knock on doors to start filming a show.”

Anello Productions continues to produce shows and other media, which is a testament to their work in the industry after four decades. Poteat said he’s blessed to be a small part of that. They’ve filmed hunts in Canada, Mexico and throughout the U.S. He’s shot Pope & Young bucks in all three places, along with turkeys “within view of the Pacific and Atlantic oceans.” The Midwest is home, though, especially Oklahoma and Kansas.

“Both are just such great places to hunt, with super diversity of habitat and terrain along with all the animals,” Poteat said. “Waterfowl hunting, big game, small game, predators, and we have great fishing in Oklahoma. We’re not just TV producers. We’re content generators. We produce a show and are actively gathering other little nuggets for social content, or for other things. We’re breathing life into the behind-the-scenes maybe more than in the past. But the elements of style of continuity and production, that’s all going to be important no matter how we consume it.

“You also have to stay true to your brand and who you are. And this is good advice for anyone: your partners and sponsors don’t need you. You need them. Someone else out there could easily replace you. At our core, at Inside Outdoors we want to treat people fairly and with respect. Annello Productions is the same way. Relationships matter far, far more than money or exposure.”

About the author: Alan Clemons is a professional outdoor writer whose work has appeared in countless newspaper columns and magazine articles for more than three decades